The Smart Way to Teach Children about Money

The Smart Way to Teach Children About Money

It’s time to rethink how we teach children about money.

Now researchers—from psychologists to economists to communications experts—have started asking why. And the one theme that comes out of their research loud and clear is that we’re doing it all wrong.

We focus on teaching finance in school when regular math is much more effective at helping children manage money. We cram their heads full of financial facts and strategies years before they’ll actually need any of it—ensuring that they won’t remember the lessons when they’re most needed. And we squirm about discussing our own family income and debt, giving children fears and false impressions they may never shake off.

Here are some of the biggest findings from the research—and advice from educators and researchers—about how we can do better.

Perhaps the most startling finding is that classroom education in finance often doesn’t translate into real-world results.

For decades, studies have extolled the benefits of financial education, pointing out that students who take finance classes score well on tests of financial knowledge—and higher financial literacy leads to better financial behavior.

Conclusions like these have led to a growing consensus that schools should teach children about managing their finances, with 43 states now mandating some kind of training.

Shawn Cole found this troubling. Not because the studies aren’t true: Many, he says, do show a correlation between financial education and good financial behavior. But few studies demonstrated a strong causal link. 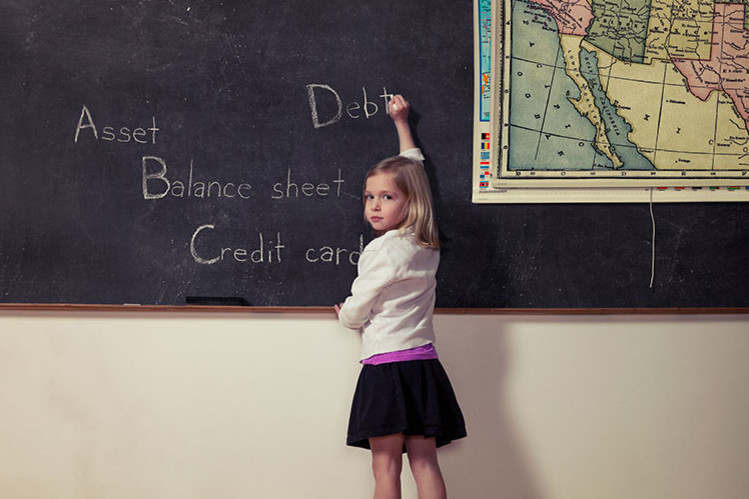 So, the professor of finance at Harvard Business School wondered, if widespread financial education were really effective, why are so many young people struggling with debt, foreclosure and low asset accumulation? He and a group of researchers set out to find an answer. They looked at the states that mandated personal-finance curriculums in high school, and compared the financial health of students who graduated before the mandates to those who graduated after. Their hypothesis: If personal-finance education worked, the students who graduated after the programs were implemented would be better off financially.

They weren’t. After controlling for state, age, race, time and sex, and analyzing a huge pool of historical financial data, the group found that there was no statistically significant difference between people who graduated within a 15-year span either before or after the personal-finance programs were implemented. Graduates’ asset accumulation and credit management were the same, with or without mandated financial education.

Why? Many studies that show a correlation between financial literacy and real-world financial success try to control for other factors that might influence behavior, but it is very hard to make causal inferences from correlational data, says Mr. Cole. For instance, the income bracket of parents may have a big effect on children’s performance on financial-knowledge tests, much more so than a class they take. 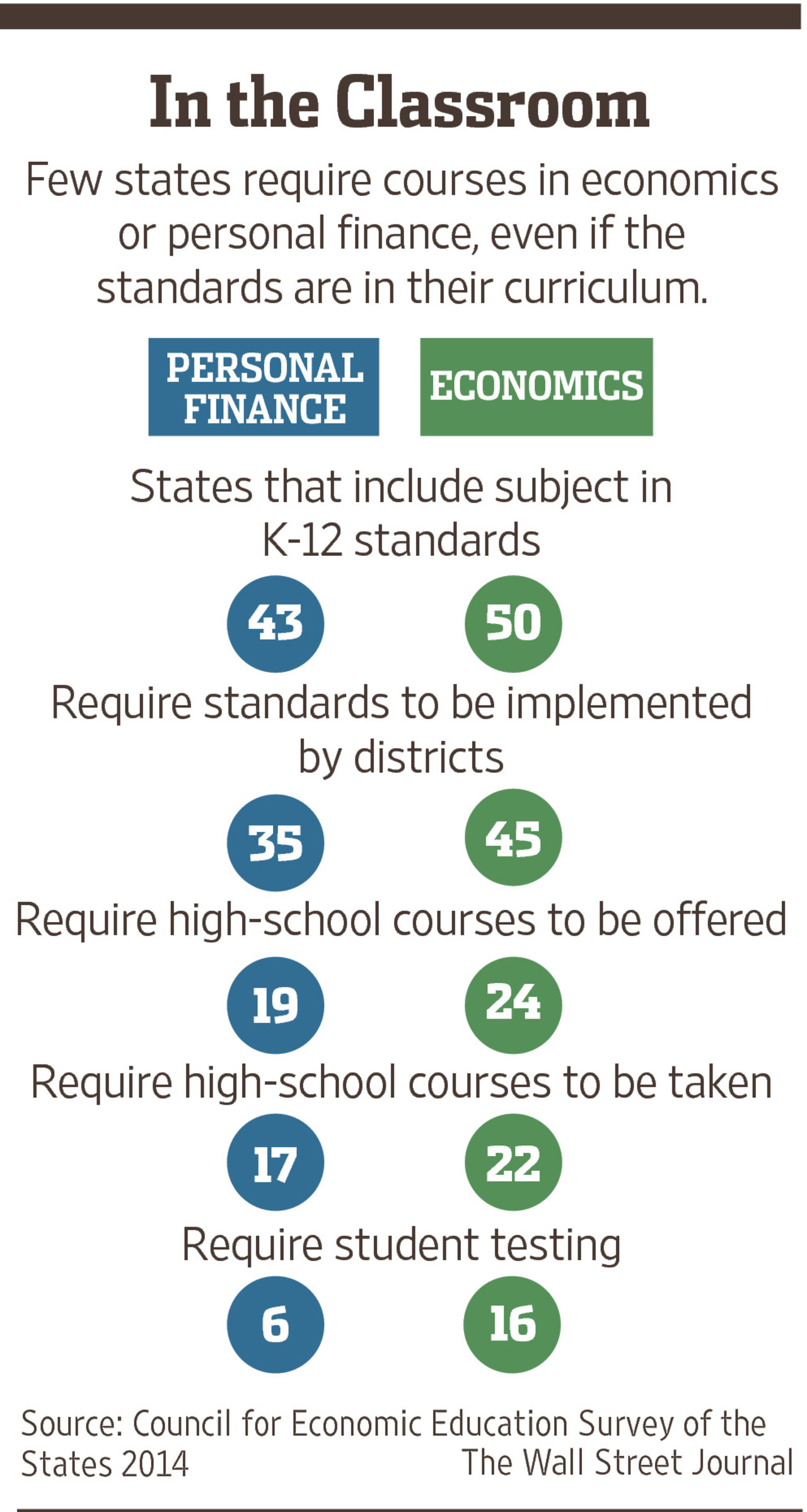 But the study, issued last year and currently under revision for publication, did find one school subject that does have an impact on students’ financial outcomes: math. Students required by states to take additional math courses practiced better credit management than other students, had a greater percentage of investment income as part of their total income, reported $3,000 higher home equity and were better able to avoid both home foreclosure and credit-card delinquency.

“A lot of decisions in finance are just easier if you’re more comfortable with numbers and making numeric comparisons,” says Mr. Cole.

Without strong math skills, he says, people tend to use more emotional ways to invest, spend or save their money. What’s more, people with less math experience make worse financial mistakes with issues like compounding or underestimating how quickly interest accumulates.

He says the math courses don’t need to be complicated, but should teach about concepts that come up a lot with money, such as exponential growth, which come in handy when thinking about compounding.

A parent of two, Mr. Cole says he will be making sure his children take as much math as they can. He recommends other parents do the same.

Tell the Whole Story, Warts and All

There’s a consensus that financial education should begin at home. But the way many parents cover the topic at the kitchen table needs a serious upgrade. “Even now, parents talk more about sex with their children than they do about money,” says Lynsey Romo, an assistant professor of communication at North Carolina State University who studies family information sharing.

In a 2014 study of 136 children aged 8 to 17, she found that while children reported their parents shared information on general topics like saving, spending and earning, children said their parents tended to stay mum on sensitive topics like the family’s specific income and family debt. 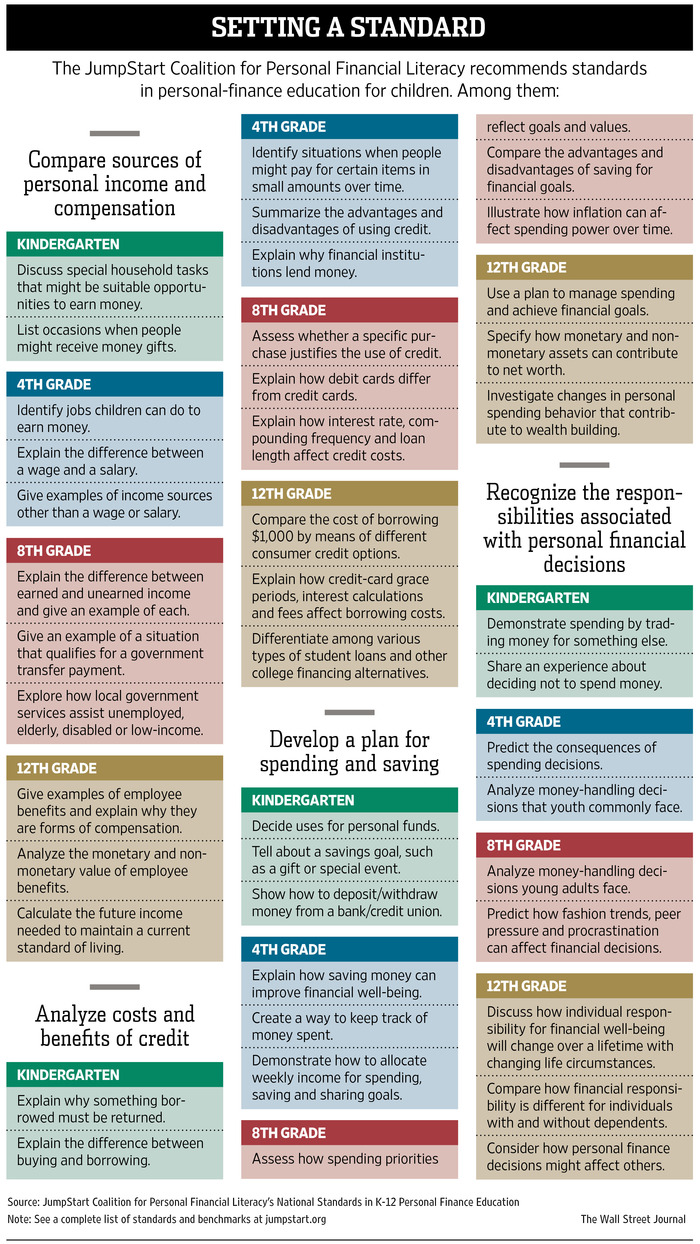 Often, parents fear causing their children anxiety or think talking about money is impolite. The problem is, keeping these secrets often caused more anxiety than telling the truth.

Children with wealthy parents, for instance, sometimes assumed their parents didn’t talk about how much money they made because they were poor—but the real reason was that the parents didn’t want the children to brag.

And the negative effects of that childhood anxiety can last into adulthood. In other research, Ms. Romo found that subjects who report limited communication with their parents about money later in life feel “clueless,” as if they don’t truly understand how credit cards or money management works.

Trips to the store are good moments to have these conversations, says Anita Vangelisti, a professor of communication at the University of Texas at Austin. Parents might explain why buying one item makes more sense from an economic perspective than another, comparing quality, price, benefits and the family’s general budget.

A group of Polish researchers came to similar conclusions about why people should speak frankly about money. Children, the researchers say, are quick to pick up on the symbolic value of money—all of the emotions it can stir and the associations it carries—even if they don’t understand how cash works. If parents don’t speak frankly about money, the researchers say, those associations pile up and lead children to act selfishly in the short term, and in the long term leave them with illusions about the power of money.

In their study, published in the Journal of Economic Psychology, the academics found that children who were focusing on money acted much more selfishly toward their peers. The researchers randomly divided 120 children aged between five and six into four groups. One group counted coins, one counted notes and the others various other objects. After doing so, the children were asked to help pick purple crayons out of a box of mixed-color crayons. The children who counted coins and notes were less willing to help with the task than those that had counted paper and buttons.

So, parents must be careful to avoid giving money too much psychological weight, saysTomasz Zaleskiewicz, one of the study’s authors, a psychology professor at the University of Social Sciences and Humanities in Wroclaw, Poland. The best way to do that is to speak about money in a rational way.

Over time, children who don’t get straight answers tend to think about money in purely symbolic terms, giving it more emotional weight than it deserves, he says. They may end up looking at the world through costs and benefits, rather than social rules of reciprocity. This can limit the ability to develop close relationships that would help people cope with problems in a way money cannot.

Further, if children continuously come to associate money with power, they might begin to see it as a solution to many problems, he says. They might come to see it as a way to cope with fears, attract new friends or increase their well being.

Teach Them ‘Just in Time’

Another mistake parents make with financial education is trying to get it done in one go. They enroll children in summer camps or one-semester classes that aim to cover everything from running lemonade stands to applying for a mortgage.

The problem with this approach is that financial knowledge decays over time, says John Lynch,director of the Center for Research on Consumer Financial Decision Making at the University of Colorado, Boulder.

In a meta-analysis of over 200 studies that was published in Management Science last year, Mr. Lynch and two other professors found how swiftly the effects of one-time financial instruction wear off. About half of the studies were about the effects of financial education’s impacts on behavior. Their analysis found that the impact of one hour of financial instruction wore off after about five months. Eighteen hours wore off after around 17 months. And 24 hours disappeared after about 20 months.

“So, if you expect that a course taught to children will stick with them into adulthood, you are fooling yourself unless you do something very different from what has been studied so far,” says Mr. Lynch.

The professor believes his findings lend support to an increasingly popular strategy among financial educators and policy makers called “just in time” education. Instead of teaching all elements of personal finance at once, “just in time” education gives consumers the knowledge they need just as they are about to engage in a transaction. So, instead of giving information about car loans to students in a textbook, consumers would get the information as they started shopping for cars.

Parents can adopt this technique, too.

“Let’s say you want to teach your child about budgeting, and you know that every year, Aunt Ethel writes your child a $50 check for Christmas,” says Mr. Lynch. “The moment to talk about budgeting is just before that happens. If you have that conversation a few months before or a few months after, it’s not going to have an effect.”

Mr. Wells is a news editor for The Wall Street Journal in New York. He can be reached atcharlie.wells@wsj.com.